CAN WOMEN HAVE IT ALL?

In the film Erin Brokowich, there is a scene which resonates with 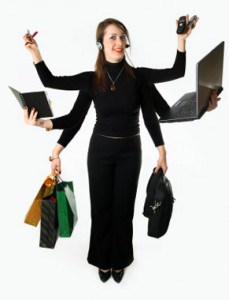 most women who juggle careers and family lives – particularly those compelled by circumstances to do so. Julia Roberts’ character Erin, a single mother who had been unemployed and is now trying very hard to keep her job, is driving when she gets a call. There was a big moment George (who is looking after her three kids when she’s working) tells her. Beth, her toddler, spoke her first word. She said, “Ball”, just like that. “My Beth?” asks Erin and stops to wipe away tears.

Those who believe women can have it all need to honestly ask themselves the question: can women really have it all? The reality is, whether they admit it or not, women can’t. They can’t share in their children’s big moments, they can’t be there when they come back from school, they can’t do those fun things stay-at-home Moms take for granted, if they want a successful career as well.

You have to be a super woman, super human, super rich or self-employed to really manage to be both mother and top professional. Women with talent and ambition on their way up the corporate ladder may smile at those evening get-togethers where their presence is requested (read, required). But, as one woman confessed, “I was worrying about my son. He had made a habit of skipping homework, was watching too much TV and eating junk food. Besides, he didn’t think he owed me an explanation; had even stopped talking to me. “ That time away from her son had an emotional price tag attached to it.

Those who sacrifice their careers for family life aren’t always happy with the decision. After a while, they miss the opportunity to do the kind of work they love. And, let’s face it, they miss the excitement and the money. Even friends don’t always  applaud the decision. “It’s such a pity you had to leave, you had such an exciting career.”  And then there’s the woman with the faintly superior smile, “I’ve never had to compromise. My kids turned out great.”

The women who have done this superb juggling act somehow end up making those who haven’t, feel that somehow they are to blame for not being up to the challenge. They can also rise up the ladder as fast as men and have a great family life. They just haven’t tried hard enough.

Successful career women who have been compelled to stop in their tracks because of family obligations, feel it’s unfair. Men don’t have the same pressures, they say. They don’t have to take that call that sends them rushing back home (even in the middle of a meeting). They can focus on work and making money – not for us, they say sounding like martyrs,  but for the family. We asked some of these successful men and  they admitted  that they aso regretted not being able to spend more time at home – it wasn’t just a big regret for women.

Times have changed. There are cultural shifts.  Men are taking on additional responsibilities at home. And the phenomenon of house husbands isn’t all that uncommon. But such cases are still too few to make a difference overall. It is, by and large, still the woman who has to make the choice.

No, women can’t have it all.  At least, not yet. Not until they are treated as separate but called equal.