The wonder of video conferencing 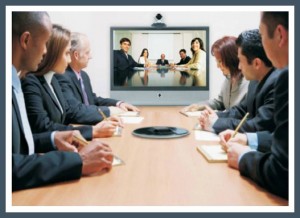 The 1964 World’s Fair in New York introduced this contraption – it was considered nothing more than that – which allowed people to communicate with one another even though they were miles apart.It was thought of as a futuristic device; no one could possibly dream that it would become commonplace.. In 1970, AT&T launched one of the earliest avatars of the video phone as a‘picture phone’. I see you, you see me, we talk to each other but we are not actually face-to-face. Ingenious – but when it was first offered to consumers it was considered too impractical and expensive to actually be put into practice.

What really happens when you have a video conference? Each participant has a video camera, microphone and speakers mounted on his or her computer. Their voices are carried over the network and delivered to the others’ speakers and whatever images appear in front of the video camera appear in a window on the other person’s monitor.

Any new invention or technology must prove its usefulness in solving a problem to warrant its existence. Video conferencing had many starts, stops and stalls along the way. But it was a case of technology adapting itself to meet human needs and over the years video conferencing became a real-time communication system, tried out and adapted by most industries, the government and the military around the world.

With the introduction of relatively low-cost, high-capacity broadband telecom services in the late 1990s, coupled with powerful computing processors and video compression techniques, video conferencing began to make significant inroads into our lives, eventually becoming an essential tool of communication in modern life.

Like all long distance communication techniques, video conferencing has reduced the need to travel to bring people together. An entrepreneur in Mumbai wants to meet a supplier in Japan who wants his partner in London to outline a strategy for expansion of business. A student in Chennai needs expert coaching before appearing for a language examination , a pre-requisite for a job application.A patient in Nagpur needs to consult a medical team in Toronto about a new procedure that he may need to undergo. An architect in New Delhi needs to confer with an architect’s firm in Paris on the blueprint of new project. Do they all have to rush to travel agents? Buy tickets, pay for hotels and incidental expenses? Spend a lot of time travelling? Now they have an option: video conferencing. They sit before their computer screens, press a button – and they can communicate, debate points, make decisions without having to leave home.

No wonder video conferencing has become one of the fastest-growing segments of the computer industry today. What’s more, the technology also helps reduce carbon emission, thereby contributing to the reduction of global warming.

The advantages of video conferencing are immense and it is now considered a standard facility in most modern, high-tech offices. Like it happened with the telephone, most companies around the world wonder how they ever did without video conferencing.