“In the middle of difficulty,” said Albert Einstein, “lies opportunity.” 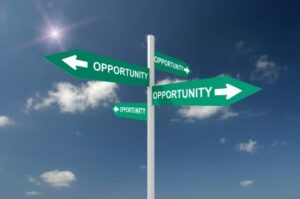 You have problems? Smile. Because in problems there are plenty of opportunities. One of the most important attributes of a successful person is the ability to turn problems into opportunities. Look at it this way: the very fact that something is a problem indicates that it has a significant meaning for you. So problems are accompanied by potential energy. Re-directing that energy away from exerting a negative influence and towards a more positive orientation makes all the difference.  Problems become opportunities because of the way you approach them. You can allow problems to drain you or energize you.

Let’s not forget that problems have only the possibility, not the certainty, of becoming opportunities. Focused thought and action are necessary to realize those opportunities.

Let’s look at two different scenarios relating to a budget crisis. In the first scenario, the manager responds by taking a hard, analytical approach. He responds by cutting his budget and downsizing. In contrast, the second manager uses the crisis to re-invent his business. He challenges his team to identify what it will take to grow business and increase revenues. It could be a more aggressive competitive thrust, meeting customer needs that haven’t yet been met, exploring new directions or re-thinking the entire marketing strategy and coming up with ways of shifting shrinking businesses to third-party associates so the company’s resources can be redeployed to potential growth areas.  He would thus have a better chance of emerging as a stronger and more effective businessman. Which brings us to a question. Should problems be treated as temporary issues or seen as a signal that it’s time for some fresh thinking – reassessing one’s current way of doing business, identifying new needs and innovating?

The fact that problems can open whole new worlds can be seen by an inspiring example. A businessman faced an acute gasoline shortage. The problem was compounded by the fact that he lived in a country that had just been defeated by a crippling war. Two major cities in his country had been obliterated. His business was damaged by bombing and further hit by an earthquake.  Everything that could go wrong did go wrong. How did he respond? He attached a small motor powered by kerosene to his bicycle and hit the road. His innovative idea won him a huge market.

You’ve guessed who the enterprising man was, haven’t you? Suchiro Honda whose misfortune resulted in a fortune as he founded the Honda Motor Company. With the steeply rising oil prices of the 70s and the demand for reduced emissions and increased mileage efficiency, he also recognised an opportunity and built the world’s first pollution efficient engine which took his company into a dominant position in the auto industry.

Merely reacting to events may lead you into more problems than you started with. You need to be constantly on the lookout for new worlds to conquer. The most successful entrepreneurs have one common factor: a great enthusiasm for new challenges. They simply can’t resist a challenge. And that’s how so many problems change into opportunities along the way.

Problems create innovators who see opportunities even in setbacks and failures. If it wasn’t for problems we wouldn’t have some of our greatest innovations.  So, the next time you see a problem heading your way, see the opportunity lying within it waiting to be exploited.