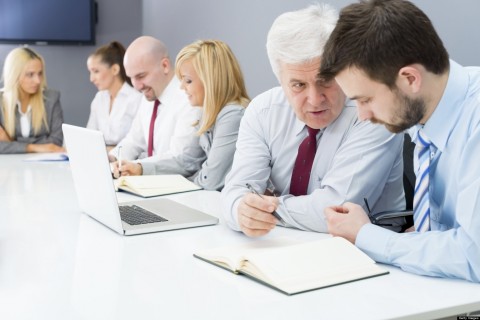 So, you have a boss who is younger (maybe much younger) than you. It happens to be today’s reality. The ‘millenium generation’ (in their 20s, 30s and 40s) are more and more in managerial positions. And the problem is, how do their senior juniors cope with this phenomenon? ‘Young’ and ‘fresh’ outlooks are being seen as preferable to just experience. If you happen to be reporting to a younger boss, don’t look at it as a disaster or something to be embarrassed about. In fact, it can be a rewarding and fulfilling experience for both parties.

Older employees tend to talk nostalgically about how things were in the good old days. Don’t just assume that things were better then than they are now. You’ll be surprised at how much a younger boss does know about a wide range of subjects,  which is why he or she is in that position after all.   As an older employee, the signals you send out to a younger boss are important. A person who is your boss (regardless of his or her age) deserves respect, deserves to be listened to. Your non-verbal communication will be noticed. It’s smart to be open to learning from younger people who grew up being more tech- savvy. They are looking to learn from you, too, but may switch off if they feel they are being lectured to. Give suggestions and advice but don’t insist that they be followed.

Avoid looking or behaving like the typical older colleague who knows it all. It makes sense to avoid  too many allusions to trends of an earlier era which  would tend to ‘date’ you. Try to negate the views that people generally have about older people, specially older colleagues. Instead, project enthusiasm and a desire to ‘think young’ and learn about new things. Stay up-to-date with technology. It’s not as hard as it seems if you don’t have a closed mind. Being conversant with technology developments in your field will be impressive specially when combined with your demonstrably greater experience.

Younger colleagues and bosses value the wisdom of the years. So find a way to get along with them. With an open mind and an enthusiastic approach to new ideas, you will find it easier to bridge the gap. There’s so much to learn on both sides as long as ‘age’ doesn’t become an ever-present spectre. Once that barrier is removed, there will be a lighter atmosphere all around, without that we vs. them approach that can hang heavy through the working day.

Look at the benefits! Older people who have shed their hang-ups have a lot to give that is really appreciated by younger colleagues and bosses as long as no threat is insinuated and no desire to show up the younger lot as being green and untutored. In fact, workplaces that have a healthy mix of young and old employees tend to be more fun. The older people actually feel younger and their younger colleagues admit that they have often been helped out of a spot of trouble by someone who’s been there and done that.  Being old is something you can’t control; thinking and behaving old is something you can.